Module three studies the environment and the structure of higher education. This fascinating topic can be seen as an exercise in self-knowledge: self as in the individual, or as in the life one leads, or as in the potential choices for either. As such, the focus of attention can be deeply philosophical and ultimately practical. Kurt Lewin puts this point best: “There’s nothing more practical than a good theory.” Well said.

Week One addresses the philosophy of higher education as well as invites us to consider the notion of the learning organisation. In the short space of 500 words available, I selected to deal with a shortcoming in one of the readings: the lack of an ontological basis for some epistemologies of higher education.

Barnett (2004) discussion of philosophy in higher education (HE) is incomplete because his focus is primarily on how institutions of HE understand themselves, i.e. the epistemology of self-knowledge. He (2012) frames the problem facing universities as “learning for an unknown future” (p. 68). He characterises the modern world as “supercomplex”, “radically unknowable” and therefore “fragile”. However, epistemology is the flip side of ontology, the descriptions of the categories of existence. Without an ontological consideration of the types and purposes of HE institution at the existential level, any discussion about radicalism, conservatism, societal reproduction and so on become moot. These discussions are valid after or concurrent with the ontological discussions. They cannot and should not replace ontology (Dall’Alba & Barnacle, 2007). Following Altbach’s assertion (1998) that “the coming period will … not see the demise of the university” (p. xvii), I offer the pedestrian counter-argument that the nature of peoples’ life-cycles in conjunction with their epistemological and other self-actualising development ensures a critical role for the university in the coming century.

The first world, having transformed into a knowledge society, needs citizens able to comprehend the demands of “symbolic analysis” (Jarvis, 1999, p. 250), i.e. to be able to create new knowledge through the understanding and manipulation of information at the symbolic level. The task of the professional is “to interpret the world through cognitive frameworks and be adept at handling those frameworks in action” (Barnett, 1997). Entry level university students typically have ability in these skills and their conception regarding the making of meaning develops along a predictable sequence (Baxter Magolda, 2004; Burr & Hofer, 2002; Moon, 2005). Clearly, the role of creating new knowledge is unlikely to be a burden for first-year undergraduates. Ontologically therefore, the being of a university is divided into separate roles of teaching and creating. The content of teaching also seems to be rife for existentialist threats from postmodernists who question the very nature of truth (Jarvis, 1999). Yet however quickly the “speed of change of knowledge” is (Jarvis, 1999, p. 251), undergraduate (and higher) courses are still predicated on knowledge dating back decades at least. At this level of activity, universities exhibit far more stability than crisis (Tight, 1994).

It must always be so. Models of human emotional and cognitive development place the average 18-year-old mid-way along their scales, for example, Kegan’s stages of constructive development (1982) describe a life-long trajectory. Neuroscience demonstrates that frontal lobe develops until the early twenties suggesting that undergraduates have a limited facility for decision making (Giedd, 2015). I present a model of the university that places the dual aspects of the university as accepting student intake (primarily at the 18-20-year-old stage) as University 1. The cognitive, emotional and epistemological states of students directs the type of instruction possible (leaving aside the crucial political choices of whether or not to promote technical expertise or cultivated citizenry in students [Altbach, 2006]). University 1 provides a social role similar to primary and secondary education, a role which is influenced by the triple helix requirements of industry, government and the research for new knowledge creation role of University 2 (Leydesdorff & Meyer, 2003). The two columns on the left and right represent the movement of knowledge type and of epistemological development. 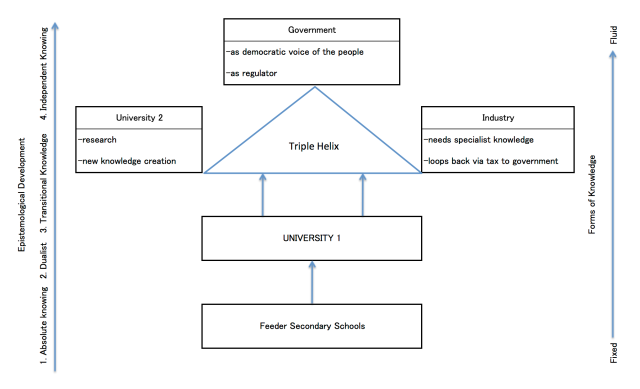 I know that Barnett knows this, having referenced his work on epistemological development. Yet his negative assessment of “the loss of separateness” runs counter to the evidence from his own educational research, neuroscience and developmental psychology. I suspect that Barnett only refers to what I called University 2, i.e. the research function, but nowhere does he clarify his ontological views on this.

Scot living in north Japan teaching at a national university.
View all posts by theCaledonian →
This entry was posted in EDEV_503, Evironment and infrastructure and tagged Barnett, cognitive development, epistemology, symbolic analysis. Bookmark the permalink.